“Know then warrior that millennia ago before time and history we know, the world was a very different place. When Valu'sia and Bokor fell, their people fled to the lands of the south.  taking their science and arcane machines with them, we now call magic.

Great cities grew, huge spires of magic and despotic evil from the desert lands, sorcerer's twisted reality and nature around them. They were greedy and sought power. The tribes of man headed north, west and East, years passed and trade routes grew, the great tribes became mightier kingdoms ruled by powerful lords. Their greed and lust for power grew as fast as their kingdoms.

Krass is a pre medieval world of dark sorcery and barbarians,

Tribes of Krass is set in a time before history began, when problems were solved with a blade. Honour came before anything and man lived by his own codes.

Alongside the tribes of man, other races exist all fighting against the forces of evil and the magic from worlds beyond our own and dark sorcerers trying to control these foes for their own ends.

Hello, my name is Faith Mc'Queen, I am 14, yes I really am and this is my first game I have written. My grandfather is to blame for all this, at the age of 5 I played my first tabletop role playing game. I played a Doctor style veterinarian “Captain Pip” looking after people and dinosaurs for a game where people went back in time to live in the past, I understand it’s from a short-lived TV series.

I didn't understand the setting but loved the storytelling. A few years later, I watched “Fire and ice” by Ralf Bakshi and Frank Frazetta with Grandad and it still is one of my favourite films. I wanted more, so together we went to a huge Live Role-playing festival as part of a Celtic barbarian tribe, it was amazing. I thought that was it until I found out that Grandad was writing these games, I knew you could buy them, but none had really grabbed my interest.

So that kind of brings me to “Tribes”, Grandad was in between projects and was watching the TV show of Conan the adventurer and it brought back fond memories. I had wanted to write a game but had no idea where to start, I had an idea for a world, a fantasy setting without Hobbits and elves and knights and shining armour and no silly wizards with rubbish spells. I loved the barbarians the rogue characters seemingly out for themselves but fighting towards a goal. The game had to include two of my other favourite thing’s dogs and fairies, but writing the rules and realising a world were another......

I want to save up enough money to be able to go on a residential ecology course in 2021 to Croatia, sales of my game will help pay towards it.

If you like the game, please let people know and I will write more adventures and make Krass a bigger scarier world.

In order to download this RPG you must purchase it at or above the minimum price of $2.50 USD. You will get access to the following files: 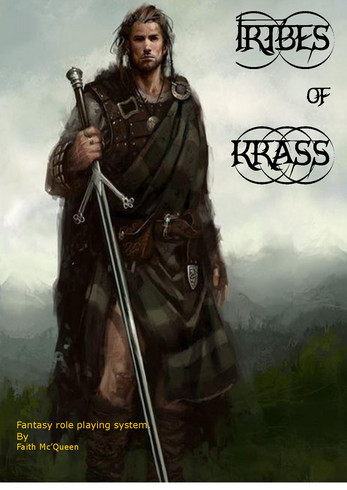